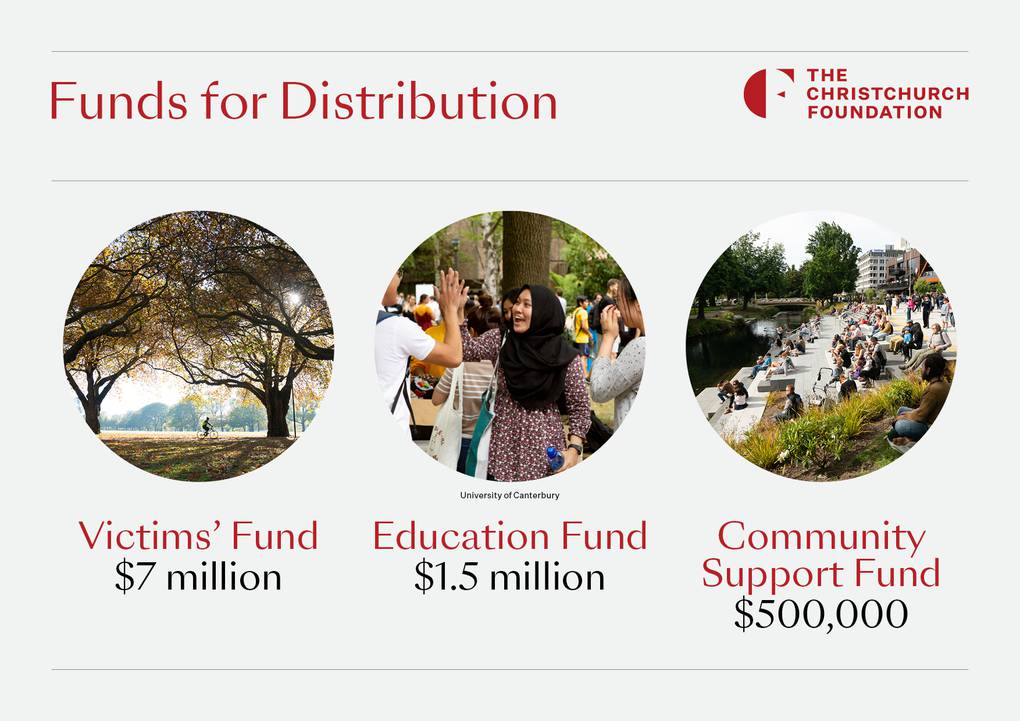 March 15 is etched in all our memories. One of the primary reasons The Christchurch Foundation was established was to respond in times of disaster. No one dreamt that The Foundation would be called upon so soon to fulfil this role. Within hours of the attacks the Mayor and the Prime Minister asked The Foundation to act on their behalf to collect funds for the victims. The Our People, Our City Fund was launched on March 16th.

We have worked hard to make it easier for generous people, businesses and countries from around the world to support those impacted by the attacks.

Over $11 million has been received in pledges and cash.  We are still receiving gifts and will continue to do so.

It is important to understand that these funds are not compensation, reparation or restitution. They are a gift that represents love and support.

The Christchurch Foundation has received well over 18,000 individual gifts.  The largest single gift was just over 1.5 million New Zealand dollars.

Many gifts were received from children from out of their pocket money or fundraising activities that they ran.  Community groups from around the world, many ethnicities and religious groups have also contributed.  Schools around New Zealand also gave on mass.

In the immediate response to the shootings The Christchurch Foundation made the following commitments to our donors and the victims:

This statement, and the supporting document show how the funds will be distributed, as approved by the Trustees of The Christchurch Foundation, our process for making that decision and what will happen now.

In those instances where donors have asked us to, we have matched their gift to funds that were aligned to how they wish to support the victims.

Of the $11 million, $2 million has been distributed since we took over from Victim Support.  This leaves $9 million. Of this $9 million, $1.5 million is allocated by donors to an Education Fund, $1 million to the Abrahamic Fund and $0.4 million to a Medical Support Fund for the severely injured.

We felt it was important that the Muslim community helped to determine how the remaining $6 million was to be distributed. To facilitate this, the original plan was to establish an advisory group formed of members of the community who would provide recommendations, but consultation made it clear that the preference of the community was for a more direct approach.

Former Christchurch City Councillor Raf Manji acted as The Foundation’s independent advisor to collect community feedback and to provide recommendations about how the funds were to be distributed.

We would like to acknowledge the exceptional work undertaken by Raf Manji. Mr Manji has provided us with clear recommendations which are based upon what the victims have told him.  He has also conducted extensive research about best practice to support communities when they are the victims of terror attacks.  It has been a significant voluntary contribution from Raf, and we thank him.

On the 20th of November our Trustees met and have unanimously agreed to the recommendations made by Mr Manji. I have been asked to begin distributions immediately.

More detail about his recommendations and how the remaining funds will be distributed are included in supporting document (see link below). We have also translated the details into several other languages and provided the research materials we have used.